Working for the Future

Australians have not experienced the effects of a major economic downturn or a catastrophic rise in the unemployment rate for 27 years. The economy has greatly benefited from the extensive reforms to the economy in the 1980s and 1990s as well as one of the largest and most sustained commodity price booms in our history in the 2000s. But the adjustment to the end of the mining investment boom has not been easy and a number of economic challenges have emerged. 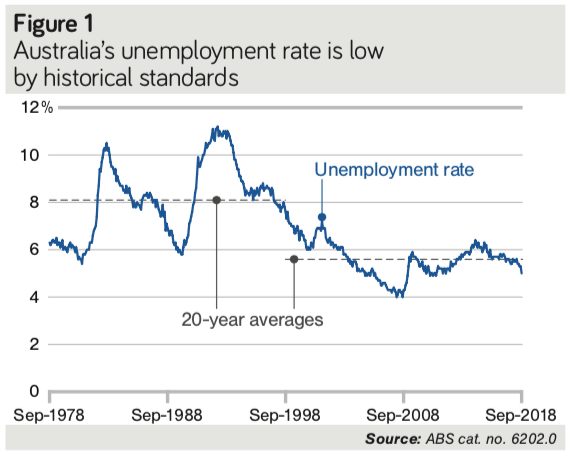 Australia’s main economic challenge is weak wages and incomes growth. This is fundamentally linked to underwhelming rates of investment and low productivity growth.

Real per capita incomes have gone sideways for six years, and are still slightly below the peak in 2011-12 (Figure 2). While nominal wages (wage price index) growth has improved by a very small amount this year, it is still near the slowest it has been in over 20 years.[1] Real wages have barely grown over the past six years.[2] 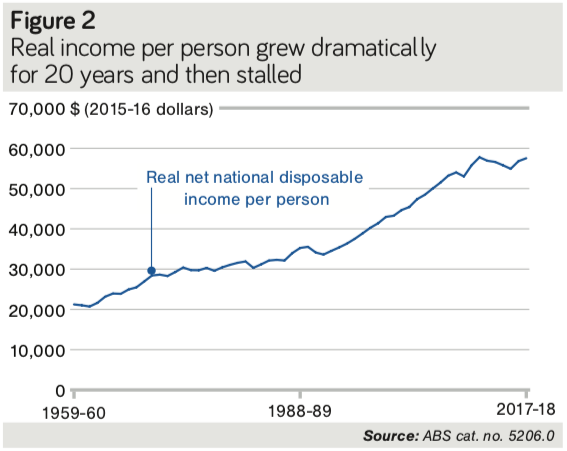 Incomes can be driven by external factors that aren’t always in our control (like international commodity prices) or productivity growth. Productivity (innovation and investment) has historically been the main driver of real income growth (Figure 3).

With the terms of trade boom now over and productivity growth remaining weak, real income growth has slowed. 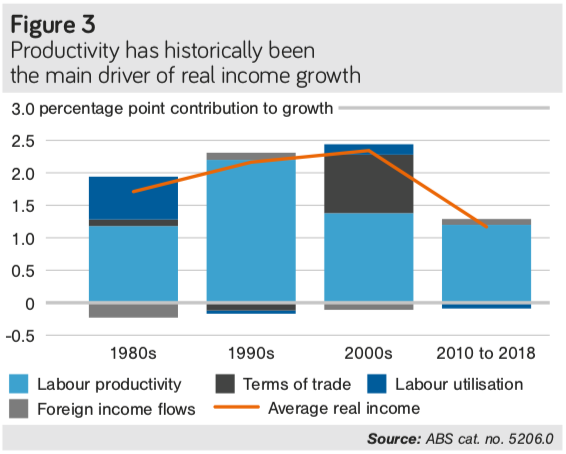 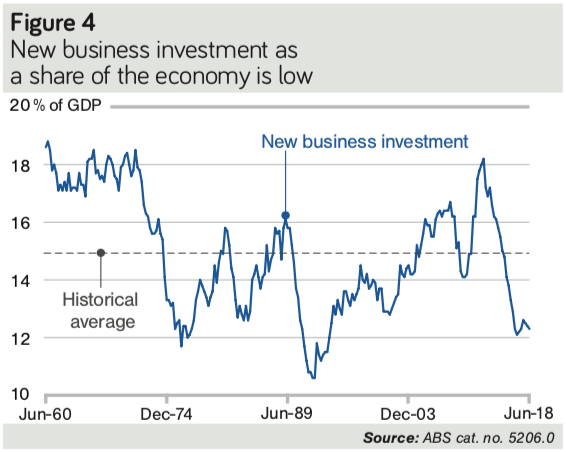 The unemployment rate has slowly been falling over the past four years and employment growth has strengthened after close to a decade of weaker growth following the GFC (Figure 5). 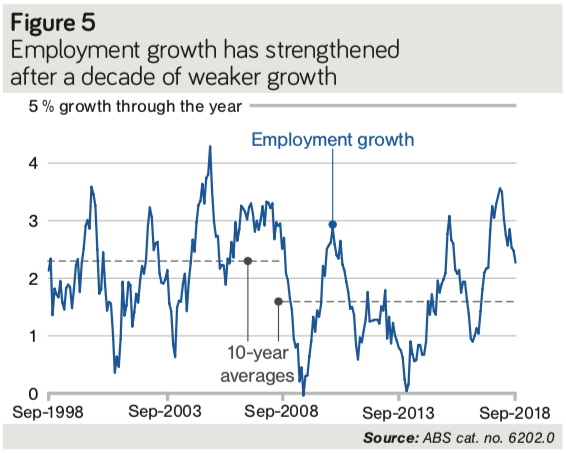 There were 280,000 people who found jobs over the past year and in almost 80 per cent of cases, these were full-time jobs. The participation rate has been bouncing around a record high level for most of 2018 after rising through 2017.[3] This indicates that people are being encouraged to start looking for a job due to the good labour market conditions and, for many, they are successful in their search.

Australia is vulnerable to the next economic shock

Australia has rarely been as exposed to the global cycle as it is now. While the budget is likely to return to surplus in coming years, long-term fiscal pressures remain. Additionally, federal net debt is at its highest level as a share of GDP in over 50 years; and the RBA cash rate is at a record low.

Indeed, the combination of a budget that is yet to get back into surplus, a historically high level of government debt, record low interest rates and very high levels of household sector debt, are an unfavourable combination.

Of course, Australia does retain a AAA credit rating. However, a comparison with the position prevailing just prior to the GFC shows how little policy ammunition we have to deal with the next global (or domestic) shock: 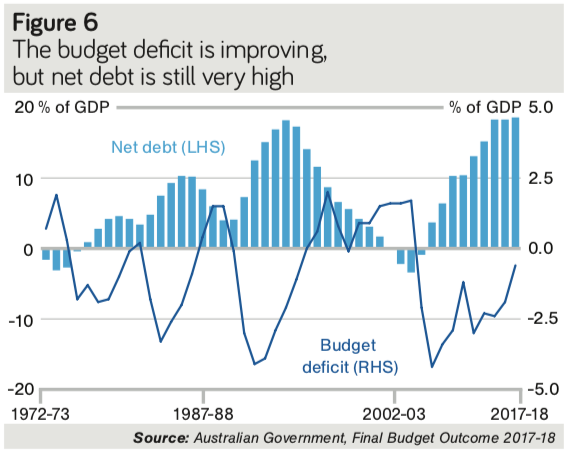 There are, as always, a number of global economic risks. These include US / China trade tensions, concerns over the Italian fiscal position, recent volatility in US equity markets and the ever‑present worry about what a downturn in China might mean for Australia.

By any measure, wages growth has been disappointing for several years

Since 2012, all measures of national wages growth have slowed (Figure 1).

The real consumer wage is arguably the most insightful measure from a national perspective, as it captures changes in total labour remuneration paid and hours worked. It is also adjusted for changes in the cost of living. Workers are more interested in what their total pay packet buys than the nominal dollar amount.

Real wages have stagnated in recent years as nominal wages increases have not, in many cases, been enough to exceed cost of living increases.

People understandably are frustrated when they see their incomes stagnate or even decline, at the same time as prices for many essential services, such as energy and health care, rise faster than headline inflation. It is small wonder that cost of living pressures top community concerns.

More recently there has been some improvement in real consumer wages, largely reflecting an increase in hours worked rather than stronger growth in wage rates (nominal wages growth is a little over 2 per cent). 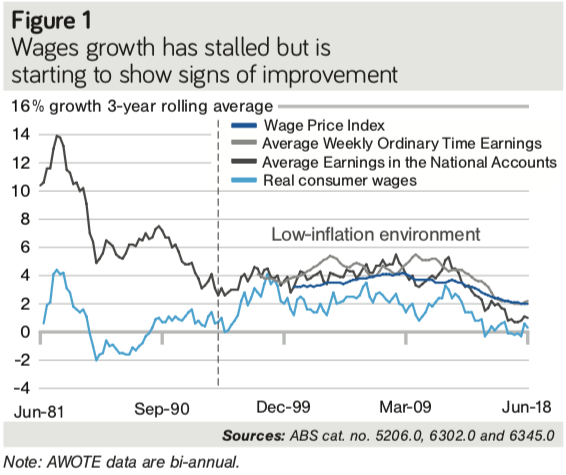 For several years, the Australian economy has been adjusting to the legacy of the terms of trade boom and heightened risk and uncertainty created by the GFC. 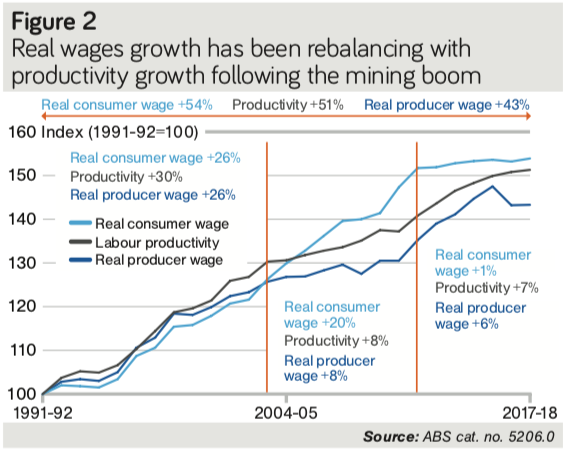 During the mining boom, nominal wages grew at around 4 per cent a year spreading income gains across the community. Businesses benefiting from high export prices could afford this as higher prices outstripped wage rises.

The abrupt (but inevitable) drop in export prices in 2011 left an old-fashioned real wage ‘overhang’ — which, coupled with only modest productivity growth since, has seen wage moderation.

Restoring the balance has taken some years, with slow labour productivity growth placing more of the adjustment burden on (slower) wages growth.

The latest estimates of multifactor productivity growth — the residual that essentially captures the gains from innovation in all its forms — is positive but not strong.

Nonetheless, it is important to recognise that the current weakness in wages growth appears to be supporting strong employment growth. In aggregate, this will contribute to growth in household incomes. 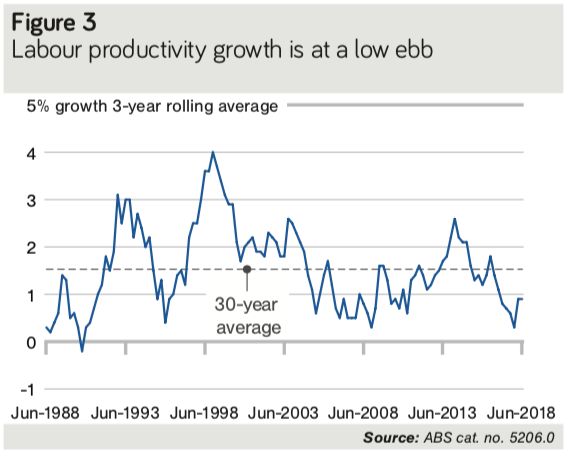 The link between wages and productivity growth remains clear

While there will be difference between sectors and some businesses will take different adjustment paths, the aggregate, economy-wide link between labour productivity and wages is clear. Since the last recession, real consumer wages have increased by 54 per cent while labour productivity rose by 51 per cent (Figure 2).

Economy-wide wages growth is likely to increase as spare capacity in the labour market continues to fall and (if) productivity growth strengthens.

Policies and interventions that undermine or ignore productivity growth, such as arbitrary wage increases or increased regulation, will only hamper future incomes growth.

Competitive tax and regulatory settings that encourage dynamic, competitive businesses and stronger investment and innovation, will be vital for strengthening productivity and wages growth across the board.